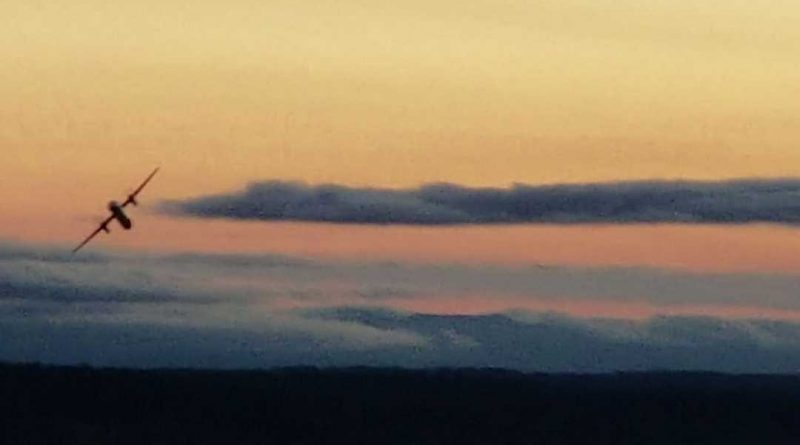 Every so often I see a glimmer of a golden nugget – a story that brings a tear to my eye and inspires me.

In this post I’m going to talk about Richard Russell – the Sky King.

To tell his story in a sentence: He was a airport baggage handler who stole an airplane and crashed to his death.

… but that isn’t the full story. Not at all.

Yes, it is true – Russell was a 29 year old baggage handler for Horizon Air, and he stole a Q400 airplane from the Seattle Tacoma International Airport for a Joyride-Suicide.

As two F-15 Fighter Jets were scrambled, no doubt under orders to shoot him down if he threatened to put the public in danger – Russell and the Air Traffic Controller had a touching conversation over the radio.

The Air Traffic Controller, playing the part of a Negotiator, tried to coax Russell into landing at McChord Airfield, no doubt seen as the ‘best case scenario’ by the ‘authorities.’

“This is probably like jail time for life, huh?”

Feeling the gravity of the situation, “I’ve got a lot of people that care about me. It’s going to disappoint them to hear that I did this. I would like to apologize to each and every one of them. Just a broken guy, got a few screws loose, I guess.”

The CEO of Horizon Air said the following:

“We don’t know how he learned to do that (fly the plane). Commercial aircraft are complex machines. No idea how he achieved that experience.”

Richard Russell wasn’t crazy, he was not an unhinged ‘sick’ person fit for an asylum.

… he was a average Joe, like you or me, fed up with the nine to five rat-race.

With no future to look forward to and feeling alienated in his own homeland.

He was tired of looking into his future and only seeing himself as a cog – as a mindless consumer, a drone, a good doggie who is told he is free … but only within the perimeter of a fenced in square.

“Hey, you think if I land this successfully Alaska would give me a job as a pilot?”

“You know I think they would give you a job doing anything if you can pull this off.”

He was awake … he was awake, staring a sick world in it’s coffee-colored face.

Like all of us, Rich had dreams growing up, and these dreams were encouraged with the ‘American Dream,’ with ‘meritocracy,’ with ‘hard work paves the way for success,’ and with every other bold faced lie that the system tells us to make us feel like our shitty little lives are of our own self-determined fate. That it is our fault that we are miserable, and that men like the Koch Brothers, George Soros and Harvey Weinstein are successful because they worked hard and “earned it.” Bullshit.

Well, Rich wanted to be a Pilot growing up. To rip through the skies, to soar like an eagle.

But Rich knew better – he didn’t have a $100,000+ college degree. He didn’t have the ‘diverse background’ needed to attain scholarships and sought-after employment.

Instead, what Rich had was a minimum wage job that allowed him to work around the people who were fortunate enough to live his dream.

Imagine Rich, a man capable of teaching himself how to fly a plane at home, watching as the aircraft takeoff and land, living his dream – as he, a part of the assembly line, tosses luggage into a cart … over and over again.

Back in the present, driving his beat up & rusted out junker home to his wife … who also works a full time job, just to keep the repo man away. Despair sets in, a emptiness that his beautiful wife can no longer fill.

As he drives home he asks himself … ‘what is this place?’

Past the park turned gang-turf. Past his dead, rotting community.

Rich is a ‘Middle Child of History.’

Forgotten, cast into obscurity, presented with an unfulfilling life of McDonalds, TV Shows, Work, and Sleep.

We know Rich isn’t the only one.

Life Expectancy is dropping as Suicide Rates are rising.

Drugs, Alcohol, and every other means of ‘escape’ from this soul-crushing society are used to temporarily escape this failed Civilisation. To escape the stagnancy and misery felt deep down. To subdue the crushing isolation and alienation so many people feel at their core.

But it is never quite enough. Everyday the despair greets you, stares at you in the face and whispers: “Your life is worth nothing and you know it.”

Rich realised – like many of us have, that he was already living in Hell.

That his life was worthless, that no amount of money or success, that no new car or big screen TV would ever make him anything more than one of seven billion Ants.

But then Rich realised something.

He realised every man has a choice to affirm or reject his Destiny.

He put down his video games and picked up his dream.

Like a warrior determined to die an honorable death in battle – Rich knew he wasn’t going to land the plane or save his skin.

What was waiting for him on the ground?

No, Rich was tired of ugliness and squalor … he would die beautifully, as King of the Skies.

Many people said, “He committed suicide, he has sinned unforgivably.”

The ‘Modern Mind’ pairs perfectly with this degenerate way of thinking.
“Life at any cost! The length of life is all that matters, to die before 90 is a tragedy!”

No, through his death, he gave his life beauty and meaning.

He overcame despair, he overcame the ugliness of this world.

In his final moments, he was a lover of life – he was smiling and at peace.

“Man, the sights went by so fast. I was thinking, like, I’m going to have this moment of serenity, take in all the sights … There’s a lot of pretty stuff, but they’re pretty in a different context … Hey I want the coordinates of that orca, with err, you know the mama orca with the baby, I wanna go see that guy.”

This was no ‘suicide’ of despair.

This was a dignified, poetic death.

This was a “fuck you” to this materialistic world, to this nihilistic hellhole.

… but, nonetheless, I am deeply saddened.

Men like Rich shouldn’t have to steal a plane and fly into the sunset to find meaning in life.

Some of us have been fortunate enough to find authentic meaning in life – but we know that so many others are in a very dark place.

This is the ‘Kali Yuga’ – a time of societal sickness.

As the infection continues to spread into the middle and upper classes, as people continue to search for meaning in radical ideology and fringe groups – the result will not always be a man like Rich, set on taking only his own life while living out his dream.

No, we will be tortured with mass shooters, suicide bombers, and every other type of carnage … the work of increasingly effective and intelligent minds.

This isn’t a ‘mental health epidemic,’ this is a plague created by our decrepit Modern society and Civilisation. A plague that is rotting us from the inside out, destroying us.

Let Rich serve as a somber reminder of just how important our mission is – we are fighting to give our people something to live for again. We are fighting for a better and brighter Europe.

Fighting to take back the future that was stolen from us.

To restore a sense of inner peace and serenity that we have been searching for endlessly.

Goodnight Sky King, see you on the other side.

— “Within every modern man there is a lost future, a tomorrow that never arrived.” —

“The real victims of mental illness can be found among those who appear to be most normal. Many of them are normal because they are so well adjusted to our mode of existence, because their human voice has been silenced so early in their lives, that they do not even struggle or suffer or develop symptoms as the neurotic does.
They are normal not in what may be called the absolute sense of the word; they are normal only in relation to a profoundly abnormal society. Their perfect adjustment to that abnormal society is a measure of their mental sickness. These millions of abnormally normal people, living without fuss in a society to which, if they were fully human beings, they ought not to be adjusted.” – Aldous Huxley